Choosing and Brainstorming
For my second visual assignment, I chose to create an Opposites Attract Meme by taking two opposite animals and creating a hybrid animal. I immediately thought about lions and zebras (I’ve seen too much National Geographic), and thought the combination would create a cool looking hybrid animal. I love the pattern of a zebra and chose to have the head be a lion as the head of a lion has more fierce, unique qualities. Using Google, I discovered a variation of the lion that was absolutely perfect–the wild lion. I decided to place the head of the white lion atop the body of a zebra to create my strong hybrid animal.

Creating the Hybrid Animal
First I saved two images: one of the zebra body I would be using and one of a front-facing white lion head. Using GIMP I opened both files. To prepare the lion head, I created a transparent layer on the image and used the paintbrush tool to paint everything I wanted to exclude in the photo (the lion’s body and the background) so as to isolate the head. I then used the automatic selection tool to select and delete the painted-in black area. Using the eraser tool I erased any black parts left behind, and my lion’s head was ready. I copied the lion head layer onto the zebra image, scaling the head and using the blending tool to make the combination look more natural. After merging the finished layers, I added some black and white text saying “Beware the Wild Zion” to make the hybrid look more fearsome. Below is my finished product! 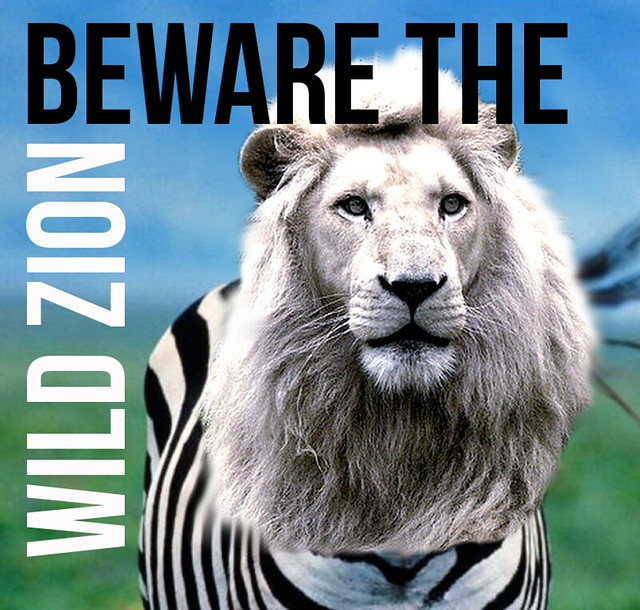