This is going to be a combination post: talking about Season 2, Episode 9 of The Wire and explaining my first visual assignment for the week.

First, a discussion on Episode 9:

Honestly, when I was watching the opening scene I thought it was funny how they were all just throwing up their guns and pulling the trigger because obviously you aren’t going to hit what you want to hit that way–it usually helps if you aim. And when you aim, innocent people don’t generally get shot. He wasn’t even on the ground floor, he was upstairs and got hit by a stray bullet. The mom tries to go about the day as usual, like a gun fight on the street happens all the time. But she can’t because her poor little boy is dead. I did think it was an interesting fade from the mom screaming into the opening song.

The cops know that the dock guys are onto them because they changed the way they were doing business at the warehouse (answering the phone differently) and the fact that Sobotka hasn’t used his cell phone since they intercepted the truck. Freamon doesn’t think the dock guys know for sure that they are onto them and that if they wait it out, they will go back to their old ways–it turns out that he is right. And I love the quote from Daniels: “Well I, for one, am a patient mother f@#$%^.” 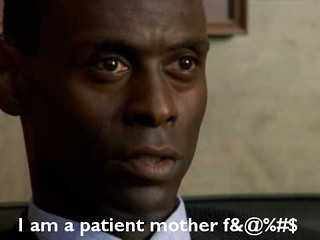 Stringer and Bodie are talking after the shoot-out and Bodie reiterates to Stringer that no one wants to buy their drugs anymore because they are weak. Stringer is more worried about the cops finding out it was their gang that was part of the shooting so they have to shut down the drug operation until the investigation passes. Stringer tells Bodie to get rid of the guns in the harbor so he cleans them for fingerprints and dumps them…right onto a passing boat. So the cops end up getting them and Bodie is brought in for questioning and he knows he messed up when he looked at the bag. Stringer is not happy with them when he finds out that they didn’t confiscate the bag.

The Greek gave Nicky the number to a drug dealer, White Mike. The Greek said because Nicky is with him now, White Mike will treat him well. White Mike calls Sergei to make sure that it is on him that he is giving Nicky only four, instead of his usual minimum of 5.

When the police came storming into the high rises, the people didn’t really care. But more interestingly, there was a shot of a kid  looking out a window, as the kid that got shot was doing. I think they were kind of showing that it could happen to anyone.

String is taking Proposition Joe up on his offer for drugs in exchange for selling at some of the places that belong to Avon/String. He knows that Avon isn’t going to like his decision. Later in the episode String has the drugs tested to make sure they’re good and they are so he follows through with the deal even though he hasn’t talked to Avon yet. He gets D’s mom (Avon’s sister) to try to talk him into the idea of doing the deal with Prop Joe but he still doesn’t want to do it. And Avon is bringing in muscle from New York for back up. When Avon was talking to Bri to ask her to talk to Avon about the deal, D comes up. Avon says, “I know he didn’t see it comin’, ain’t none of us seen it comin’.” This is ironic because Stringer is the one who had D killed. But D’s mom said she saw it coming so that is why Stringer got away with it, because people believed that D would actually kill himself.

Ziggy says he is done with drugs because he has grown out of it. But he has another “business” idea to make him money fast. He is going to steal the nice cars from the docks and sell them to the guy that they sold the cameras to. I guess the guy agreed to do business with them because Ziggy and the guy with the beard who helped them before were devising a plan on how to get the cars out–had to plan it so it didn’t look like an inside job.

The whole deal with McNulty and the sex hotline thing was funny to me. First he struck out because they thought he was a cop. But then Freamon gave him the idea that the farther away you are from, the less they will suspect that you are a cop so he used a fake accent. I thought it was funny that he had to carry a “murse.” They arrested everyone and McNulty probably was not happy with their timing, just a guess. I also thought it was funny how he was typing up his statement and he was chicken pecking on the keyboard. Rhonda also did not seem happy after reading McNulty’s statement.

Other interesting things from this episode: the younger Greek shared a light with the guy that he was talking to about payments. Prez’s father-in-law is not happy that they are making the case about more than Frank Sobotka but surprisingly the Deputy Ops has Daniels/Rhonda’s back on that.

You already got a preview of my first design assignment for the week in the text up top. But here it is again

The assignment I did was “Six Word Memoir” (3 stars). But instead of doing it for me, I decided to do it for Daniels. The quote on there is from this episode of The Wire (which is why I decided to do a combined post for these). It’s not actually a direct quote from him, but it is close and I think it describes him. He is willing to wait for his law career. He was willing to stick it out in the police department for a long time even when everyone treated him like dirt. He was willing to stick it out even after his wife told him to quit. Seems to me like he is patient.

Like many of the other images with words that I make, I used GIMP. It was relatively simple because I have done it so many times now. I did look on dafont.com to try to find a cool font but none of them were simple enough for what I needed. I wanted a simple, manly looking font but couldn’t find any on there.

So I got the picture from this website and imported it into GIMP as a layer (still not sure if that matters or not). Then I added text to it. Re-positioned, re-colored, and re-sized the text. I also went through the fonts looking for a simple, manly one and ended up going with Gill Sans MT Bold. And I think it is both simple and manly. I then exported the photo and uploaded it to Twitter, Flickr and the Hub via Known. So there you have it, folks.