My first assignment in the shoes of Stringer Bell was the “Create Your Own Magic Cards!”. I never noticed this assignment before which leads me to believe that it was just created. This is seriously a fun and creative assignment. Gaming cards of all sorts are fun to read and fun to make. This was also perfect because Stringer would be a GREAT card to make. There are so many options for this! Let’s get down to it.

Obtaining the gaming card outline was simple. I just googled “magic card outline” and there were so many choices. I ended up picking this magic card because it said “special card” and Stringer Bell IS special.After i had the magic card outline i went looked for a good picture of Stringer. Sadly, not many pictures of the actor in Stringer’s costume, so my choices were limited. I ended up choosing this one because it made him look badass. This process was pretty simple to be honest. I used GIMP to add the pictures and text in layers. Thinking of what to write on Stringer’s card was actually the most difficult part of this assignment. My favorite term that Stringer and his crew use in the show is the word “muscle” when referring to the guys they hire as protection. It’s funny. Now, we all know Stringer is the main guy, right behind Avon if not ahead of him. So, i put him down as a “Level 10 muscle” because that’s magic card related and hilarious. The next part i wrote was based off of Stringer’s biggest talent and gift. His intelligence. So, that’s his power move because he’s the smartest and basically out smarts the other guys. Finally, i chose to write that he’s “Advanced Gangster Leader” because let’s be real. He’s above Avon and in a way always will be. That is, until he dies. behold! My Magic card below! 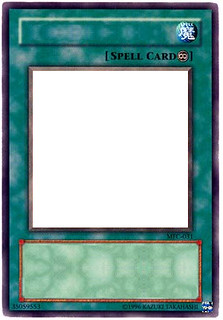 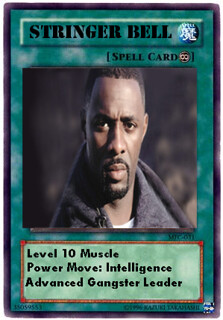