Strange, right? McNulty and Stringers becoming best friends. I remember the first time in The Wire where they talked and Stringer drew that mean picture. Anyways, maybe they were best friends at one point. Like Professor Xavier and Magneto, yeah? Who knows. For my first assignment with my Final Project, i chose the “Opposites Attract Meme”. GIMP is by far my favorite application to use for photo editing so i’ve kind of gotten the hang of it. Just because i’m good with GIMP doesn’t mean this assignment was easy! I already knew how to do the whole crop head thing. I did a tutorial on it in the beginning of the semester, here! My biggest issue was trying to choose the right photo. There are few scenes with McNulty and Stringer, yet alone one where they are both having a good time. I ended up choosing a photo of McNulty and Bunk hanging out at the bar, as usual. 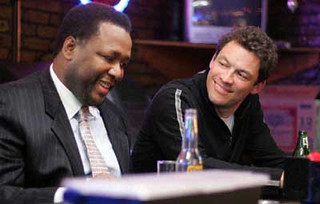 Now, Bunk’s facial structure is way different from Stringer’s. Let’s just say Bunk’s face is a bit more round. So i had to morph stringers face a little bit and smudge some of his face to make it look KIND of normal. I’m not a fantastic photo editor so you can see where there are some mess ups. My next step was to choose a picture of Stringer that was from a similar angle and looked good for this bar scene. I went through a couple of google images pages until i found this gem. It’s not from The Wire but from The Office instead. There wasn’t too much of a difference. I think this Stringer may have more grey hair but that’s all. After i cut out his head, i saved it and added it to the bar scene. I’ll repost some directions below. Here’s the original picture of Stringer! 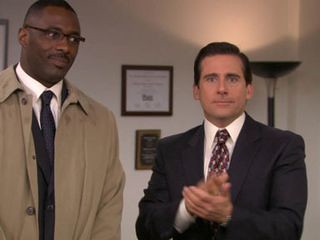 Now after a couple of hours of work, here’s the final piece! Opposites do attract! 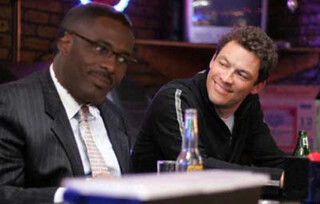 Like I said, this thing was the hardest to make considering i’ve never used GIMP before, except for the GIfs and we all know how those turned out… My first step was to find the right picture of Will Smith and Jada. Just look at their bodies. They look so happy and Jada is enjoying a snow cone of some sort. What else could you ask for? Then came Avon and Stringer. Avon was the easiest head to crop because it worked the first time. Here are the steps for cropping:

What I did here was open GIMP and chose the scissor icon thinking it would cut, and yes, it did! I cut around Avon and Stringer’s heads. After not knowing what to do next, I watched this tutorial which helped me a lot.

Layers: As the tutorial says, you go under the “Layer” menu and choose transparency then choose “Add Alpha” which I did.

Select: Now you go under the “Select” menu and choose “Invert”. After invert you now have the background selected. Now go under “Edit” and press clear.

DON’T FORGET PNG LIKE ME!: Now, Please… Please… don’t forget to save the image as a PNG so the background is not white. I was stuck on this for almost 2 hours wondering why my background wasn’t transparent. Then after emailin/tweeting/bothering Groom, he gave me his words of wisdom. Keep in mind, this whole process is just for cutting the heads out…. There’s more.

Open As Layers: Yes, open the pictures as layers. From here, you select the tool that is for moving layers and you shift the floating heads over the bodies of the soon to be headless. That’s really all it takes. I wish i could say that with more sincerity but this process was frustrating for me. Hopefully you will avoid frustration.