The little caption assignment worth 2 stars was quite simple. We had to find a picture and add a caption to it. For this, I put the show on full screen, then took a screen shot, and uploaded it to word. The caption I added was my take on what Bodie was saying in the scene. He was telling Stringer that while the police have his fingerprints on the gun, they are wrong. He also figures that because the police let him go, he is off the hook. Anyone who has watched a police show knows that they will get him. 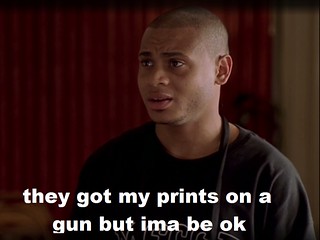