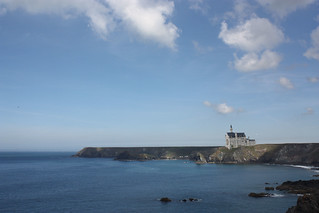 For my third visual assignment for the week, I decided to do the Imaginary Places assignment, so I made my version of Cair Paravel from the Chronicles of Narnia.

I used my own pictures from some traveling I did this summer, and used photoshop to put them together. I used a picture of Neuschwanstein Castle that I took in Germany, and a picture of The Lizard that I took in England for the landscape. Cair Paravel is described as being a beautiful castle on the sea, and since C.S. Lewis was writing in England, I thought that he might have been picturing something close to The Lizard.

I used photoshop to open both pictures. I used the Quick Selection tool to grab Neuschwanstein Castle, and cut and pasted onto The Lizard. I then resized the castle to match the landscape and moved it so it was sitting on the cliff.