This was an assignment that was not difficult in design but more technical in information.  In a Venn Diagram, the design assignment recommended to pick three top Pop culture figures and tie them together in topics. The overlapping areas of the circles would be information that the circles share together.  Instead of using pop culture figures, to put a twist in the assignment, I tied three Wire characters together that are not in the same circles, literally.  The three characters will be Frank Sabotka of the Shipping harbor, Lester Freamon of the Baltimore police department, and The Greek (a crime lord).  Of the three individuals, two of them I had researched on my other design assignment, Keeping up with the Cast.  ( Lester Freamon, and Frank Sabotka)  Both Lester Freamon and Frank Sabotka went on after the series “The Wire” ended and were in the series, “The Divide”.  In The Divide, Frank Sabotka’s character is put to death for a murder that he didn’t do.  Lester Freamon’s character is the Police Commissioner leading the prosecution.  This ties their circles together, in addition to being in the wire together.  The third person tied into the Venn Diagram is “The Greek”.  The Greek’s connection to Sabotka is that he allowed The Greek to ship his containers into the docks that he was responsible for.  Freamon’s connection to The Greek is that ultimately the murdered girls that Freamon is investigating were on The Greek’s container.  Freamon is digging to the bottom of this case to find out who is the leader of the entire operation that is responsible for the girl’s deaths.  That person is The Greek.

This ties all three of the circles together.  See my diagram below…. 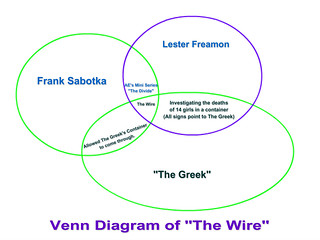