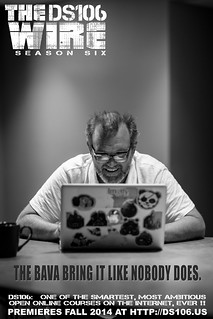 In preparation for this semester’s wire106, Paul and I started having discussions about the various elements of storytelling in the first three episodes of The Wire. Paul has already blogged his reflections on the first episode of season 1, “The Target,” and what follows below are mine. Also, you can listen to our conversation about it here, but I’m not totally satisfied with the quality of the Google Hangout archive. We’ll be working on alternatives over the next week or so as the class gets going. I guess that’s why we’re starting early.

One of the things I did while preparing for my discussion with Paul is listen to David Simon’s commentary on “The Target,” and it nicely frames what he’s trying to accomplish more globally with this series, namely tracing various institutions’ effects on the people who work and live within them. We’re all compromised by these institutions, and at the same time must contend with them. The Wire is a meditation on this reality, tuned specifically to the modern, post-industrial cities of the U.S. Baltimore becomes the canvas—and leading character—on and through which this story is told.

Initially The Wire, particularly season 1, comes off as just another cop show. And Simon talks a bit about this in his commentary, he notes the surface resemblance to a cop shows merely masks something different. The cop show might pull people in initially, or even push them away—like it did me in 2002, but the series is not a formulaic cop drama. It’s an investigation into the idea of policing to the degree it tells us about our culture. In that regard, as Ryan Chernin’s essay “Hardwired” argues, The Wire has more in common with 1930s and 40s existentialism of hardboiled fiction than anything written for television in the last fifty years. And, as demonstrated in the following clip, Simon goes to great pains to both critique and diffuse the adrenaline-fueled, testosterone-laden cop shows of the last two decades.

Rather than this scene ending in some revelatory bust that sees the drug dealers busted and order restored, all the pomp and circumstance is for nothing. A couple of guns, one missed on the initial search, and an informant getting even with her man. It’s a scene where the action-packed image of policing is deflated—police work is not simply running around yelling at people with your gun out. It’s painstaking, thoughtful work that is often dangerous to the very institutions it is supposed to protect when done well.

This idea of police work comes up again and again throughout the series, and the premise of the whole first season—bringing down the Avon Barksdale’s drug empire—is a result of detective Jimmy McNulty wanting to do real police work. In fact, he is continually crucified for that very fact within the police department. The following scene features McNulty getting chewed out by his commanding officer Rawls for bringing the Barksdale case—and the attendant homicides—to the attention of his superiors. He’s made work and waves for everyone, and that is not making him popular. [As a rule there is a language alert for every clip from The Wire.]

S01E01-McNulty dressed down by Rawls

What’s interesting here is that when McNulty is listing the Homicides Rawls is flipping through index cards with each of their names. As Simon notes in the commentary, this is reducing murders to index cards. Murders don’t matter, only the “statistical suggestion of success” matters. High clearance = good, low clearance =bad. In other words, a data driven nightmare. And, as is often the case, shit rolls downhill and McNulty is taking one on the chin for trying to do real police work.

This scene is interestingly paralleled in the world of the drug dealers McNulty’s chasing. In the very next scene Avon Barksdale sits down his cousin D’Angelo to have a similar conversation. D’Angelo wasn’t doing his job, he created more work for Avon, and now he’s getting lit up. The idea that these two institutions have more in common than we care to admit is not necessarily novel. Yet the way the two scenes are mirrored to subtly tell that story while developing the characterization is. This theme will be developed through the first season, and McNulty and D’Angelo might be thought of as narrative doppelgangers in their respective worlds.

S01E01-D’Angelo Dressed Down by Avon

Another point that’s striking about this series is how relevant and prescient it is about our moment. From the very first episode the series invokes the political specter of the War on Terror after the 9/11 attacks, which at the time of the pilot’s air date were only nine months old—almost to the day. The following scene not only introduces the ongoing theme of an increasingly totalitarian state post 9/11, but also the omnipresence of everyday surveillance. This shot of a surveillance camera is just one of six in the first episode alone. The idea of being watched and controlled by forces outside your control is everywhere embedded in this series. Interesting point Simon raises in the commentary is that the bit about the FBI moving all their resources away from the war on drugs to counter terrorism was purely predictive—but turned out to be spot on. Almost like fictional investigative reporting.

The final clip we talked about was the oddly placed flashback scene at the very end of the episode when D’Angelo sees the gunned down body. The flashback takes the viewer back to the beginning of the episode, in a very un-Wire moment, when the dead man was testifying against D’Angelo in court. This is odd because this series doesn’t pander to the viewer, it demands you watch closely and rewards you accordingly. Like a good novel, as Simon points out in the commentary. And that’s probably why Simon acknowledges his ambivalence about this scene, saying HBO pushed them to include it because they were worried the viewer would be lost. An interestingly reflexive moment where the entertainment industry—an institution that’s the invisible presence throughout the entire series—is compromising the aesthetic. It doesn’t happen again for the rest of the series, but it’s interesting how this moment suggests the pressures to contend with the institutions are ubiquitous.

So those are the moments, themes, and clips that intrigued me from episode one. I can’t recommend enough listening to David Simon’s commentary—he provides a brilliant overview of how The Wire is more akin to Moby Dick than Cops. Delivering high art to television suing the Trojan horse of a cop show. But that’s not to discount the importance of the first season being a cop show, because as Simon notes that the crime genre is to contemporary post-industrial society what the Western was during the late 19th early 20th century. It reflects the deepest schisms in our society, the darkest realities of our culture, and the almost comical endurance of the American dream.