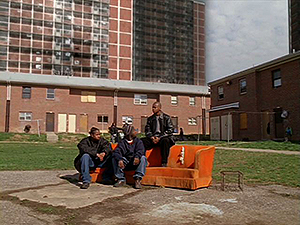 In the commentary for the first episode of The Wire, David Simon said they used CGI special effects to put the towers in behind the low-rises, because they had been torn down a few years earlier. I thought of that when I saw this shot. There’s something about the towers in the background that seems ghostly – the lighting isn’t quite right and the edge is blurred. Maybe they just ran into the limits of the technology at that time. 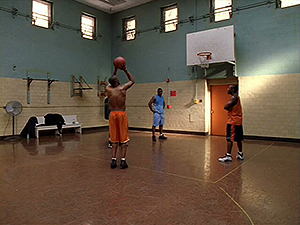 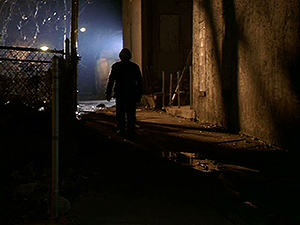 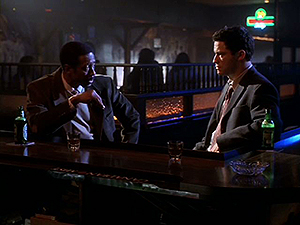 Some of the coloring and lighting in the photography strikes me as Bava-esque. That alleyway shot could come right out of Kill, Baby … Kill.

Another thing I picked up from the Bavafest was the concept of visual rhyming in shot transitions. The one is a kind of pun, as the shot switches from the janitor’s bucket to the coffee cup. The other shows an interesting contrast between McNulty’s kids at play in the bright sunlight and the other kids playing at night in the mouth of a dark alleyway. 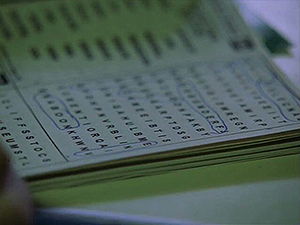 Here’s another example of photographic foreshadowing. Presbo is hard at work goofing off with a word search puzzle. It says something about his character, much like Freamon’s hobby said something about his. Presbo’s talent for solving puzzles will soon play a key role in the storyline.

Deputy Burrell’s golf game is another picture that tells a story, always missing his shot. 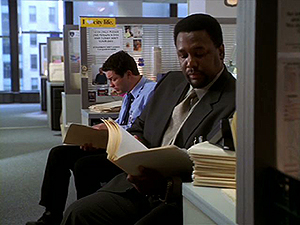 This shot I like for the composition – the repetition of the cubicle walls and the perspective of the shot.

Another visual theme I’ve been seeing repeatedly is reflection. It’s related to surveillance, as we’re sometimes watching people. Sometimes we see scenes unfold through mirrors. Here we see the city go by reflected in the car window.

In the scene where the police are searching the house for Bodie, the camera mainly stays on Bodie’s grandmother folding laundry in her living room. Most of the story is told through sound – the police at the door, the sounds of the street when the door is opened, the muffled sounds of the police looking through the rooms upstairs

The bar scene where Freamon explains how he got on the pawn detail is another with some noir-ish jazz in the background. The music creates atmosphere organically because it’s coming from the setting and not layered over it. The story ends up being pivotal in the plot of the series.