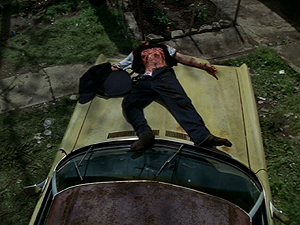 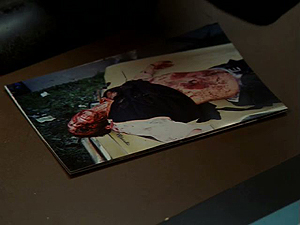 Episode 6 opens with Brandon’s tortured corpse sprawled across the hood of a car, for everyone in the projects to see. His death is the central point to the episode. It closes with a repeat of the image, in the form of a photograph on Lt. Daniels’ desk. There’s a kind of symmetry in that. 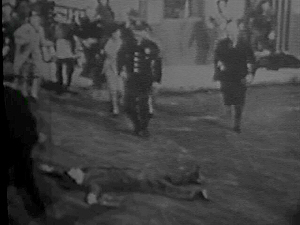 There’s an interesting scene early on of D’Angelo at home, getting ready for the day. The camera sweeps by a television showing an old black and white film, with police running up to a dead body in the street. The way the body is laying there matches the way Brandon was positioned. It suggests to me that D’Angelo has removed himself from the reality of the killing – life goes on, it’s in the past. 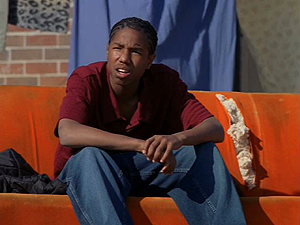 In contrast, Wallace is haunted, tormented by what he saw of what was done to Brandon. Here he is, sitting on the couch telling D about how he saw the body, “cut open with his insides hanging out.” And there’s some visual poetry in the couch, with that large vertical gash in the upholstery, with the stuffing coming out. Wallace isn’t removed from it at all – he’s sitting right on top of it. 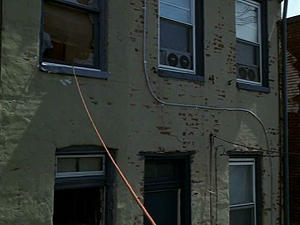 The beginning of the episode shows another stark contrast between D’Angelo and Wallace. Wallace lives in a vacant building, getting electricity from a string of extension cords running through a broken window to an adjacent building. He shares a set of rooms with other children and acts as their guardian. They all sleep in their clothes. The next scene is D’Angelo’s home, where we see him spend time going through his large wardrobe of brand-new clothes, cutting off tags and trying on different outfits. The economics of The Game do not favor the pawns. 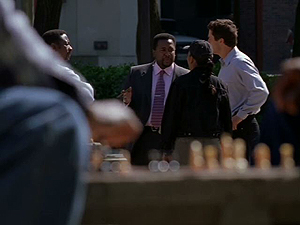 Chess shows up again, in the foreground of this shot. Members of the squad are discussing strategy in the background, wondering if they can play Daniels against Rawls to keep the game going. There’s a subliminal quality to all these messages. 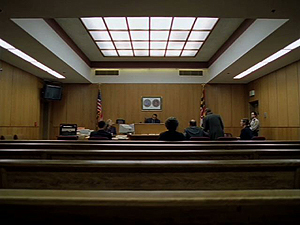 I love this courtroom shot – the use of line, perspective and symmetry. There’s an emptiness to it too, which may say something about the juvenile justice system. 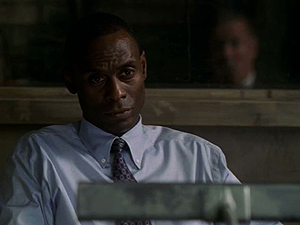 Another one is this shot from the conversation between Daniels and Augie. We see Augie’s reflection in the glass behind Daniels. His reflection lingers and comes more into focus after the conversation is over, as he thinks about whether or not he wants to stay with the squad.

Simon violates his rule about unsourced music in this episode, during the scene where Avon, String and Stink slow-walk through the courtyard making the payoffs. It’s a potentially pivotal moment because Barksdale is seen doing business out in the open, but the guy who should be watching had to see a man about a horse instead. Here’s the tail end of the scene.

What’s up? What you need?

I like the scene where D confronts Cass over skimming from the stash. The street sounds are great, but the sound of the eggs breaking doesn’t work quite so well without the visual. But what I really like is Cass’ response when she sees D: “What’s up? What you need?” It’s the exact same thing that String said when D paged him in the last episode. I know this because it’s part of the repeating sound loop on the DVD menu.