There’s a writing assignment to do a Poem Made With Twilight Zone Episode Titles which comes from the ds106zone days. Since we’re doing Noir106 these days, I decided to give it a different twist and use episode titles from The Shadow. That’s a thing about these assignments: They’re more about being creative than following the rules. You can alter them, or you can make up your own assignment and add it to the bank. If I had thought of it earlier, I might have added a Shadow Poetry assignment, but at this point I don’t know if it matters.

I went looking for titles. First I tried searching the Internet Archive, but that didn’t work out so well. I did find an extensive list on Wikipedia however. It seems like every other episode title ends with “death” though, which wouldn’t make for proper poetry, but there were ones I could work with. I scrolled through the list and pulled out titles that rhymed and built a list. I grabbed couplets that felt like they fit together, even if it doesn’t make a whole lot of narrative sense: 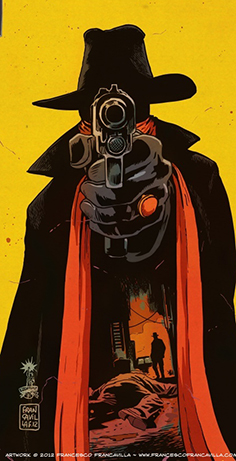 The Shadow by Francesco Francavilla

It doesn’t really tell a story, but it does paint some kind of work picture, so I’ll call it poetry. It has a rhythmic feel to it as well.

At first I asked my wife for help with it. She likes things to make sense (but she married me anyway), so she started to make it a narrative poem, tweaking the verbiage to make it flow and give it meaning. But if we were going to go that route, it would have to come to some conclusion, and I didn’t see that in the lines I had. So I took a step back and decided just to use the raw titles in a sort of found object poem. So there you go. Who knows what rhymes lurk in the titles of episodes?