The first part was the key scene for me – where String gives Bodie the order to kill Wallace. It’s all there, but it’s almost entirely unsaid. “What’s up with that boy?” They don’t even use his name. And just a stare and a nod in response to “You ready to put the work in?” They know, from the rule of The Game, what they’re talking about. We know from the context of the show. But nothing is explicit. Similarly, in the discussion with Avon and Stringer, it’s clear that Levy is recommending this course of action with regards to anyone who might talk. “You can replace product and currency” he said. People weren’t worth a mention.

The second part is two parallel stair scenes. We’ve seen stairs used as a metaphor before. We see it again with Poot. He has to think about going up the stairs. Does he want to step up in the game, or step off? We see it repeated after Avon is arrested. McNulty thinks there is unfinished business, but Daniels motions for him to come down. The case is over. 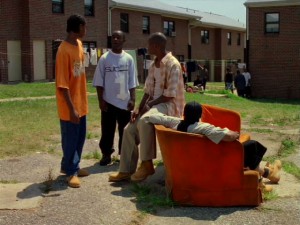 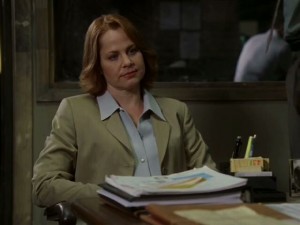 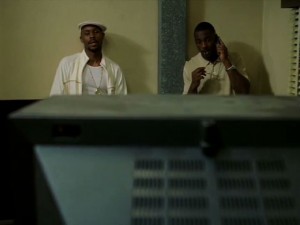 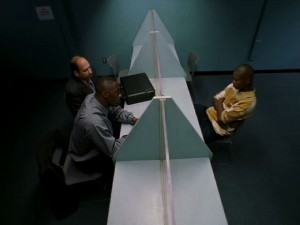 Wallace comes back, dressed in orange to match the couch, symbolic of wanting back in the game. We see something like that, though a little more subtle, in other scenes. Pearlman blends with the background in Daniels’ office, like Stringer blends with the color in the office in the club. There was a shot in the previous episode where Prez matched the room like he belonged there. Maybe that’s the message. In contrast, there’s the shot of D in the visiting room in jail. String and Levy blend, as does the officer off camera, but D sticks out like a sore thumb. A couple other things about the shot: One is the angle – we’re looking at the scene from the position of a surveillance camera. The other is the composition, with that strong dividing line between D and the other two. Every picture tells a story…

D is called into the office to give up Wallace. The tension is heightened by the drums in the background, coming from the club downstairs. The sound is reminiscent of a rapid heartbeat, charged by fear – a subtle but powerful effect.