I did yesterday’s daily create, “Take us an experimental water photo.” I thought about it all day because I didn’t know what I wanted to do. I knew I wanted to take a splashing one but I didn’t know how or where. Then I remembered that I have some vases that I could use and I figured a quarter would make a pretty cool splash. Rather than trying to take a picture of the splash (I may have been there all night) I took a video of it and decided to screen shot the part that I thought looked good. The first could of times I went through the video by playing it and trying to pause it when the splash looked good. The problem with that was that it was a two second video so pausing it exactly on the right time was nearly impossible. Then I realized I could pause it and scroll through the video frame by frame, allowing me to pick exactly the frame I wanted to capture. I ended up with the following: 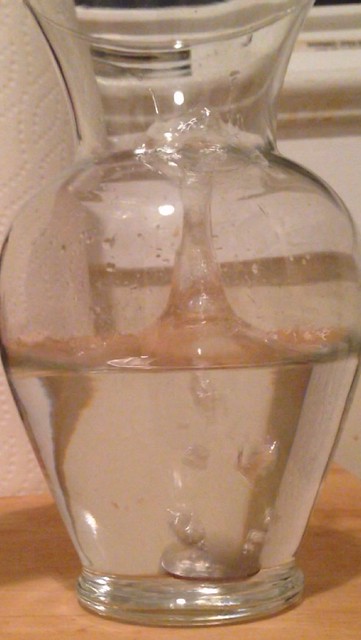 To me it almost looks like an atom bomb just went off. I liked this picture because you could see the splash and you could still see the quarter that made the splash. The quarter also looks huge which is kind of cool. Anyway I’m happy with how it turned out.