This scene from The Wire caught my eye from a design and photography standpoint. There’s an interesting color contrast going on between the reddish tones of Stringer’s shirt and tie and the greenish background. Red and green are what is known as complementary colors. These are colors that fall on opposites sides of a color wheel. Visually, they tend to stand out against each other. In this image, the colors are muted, which adds a nice subtlety to the contrast. None of that happened by accident, of course. Every shot and scene is designed, meaning the photographer, the lighting director, the set and costume designers, all made deliberate decisions in their respective roles to further the story. I should note that this comes from a Youtube video, so the colors may have been distorted in all the processing between ripping, uploading and converting.

When the scene got to the part where String was counting the money, I had to make a GIF of it. String is all about the money – he’s playing the Game to win. So a looping GIF would tell a succinct little story about him.

I used a Firefox add-on to download the video, then used MPEG Streamclip to extract this segment and export it as a MOV file. The key there was to take just enough and no more. I started at a point where his hands were apart and inched the scene forward to the next point where his hands were apart. That way the looping should be invisible. I imported that into Photoshop, converting the video to frames, and used the Save for Web function to make it a GIF. I put the result on Tumblr.

When I looked back on it, I thought the head and knee movements were distracting so I wanted to freeze them. I opened the GIF up again in Photoshop, went to the top layer and created a new empty layer on top of it. Then I went back to the previous top layer, selected the whole thing, copy and pasted it on to the new top layer, and used the polygonal selection tool to cut out the area where his hands and money was. I used 4 pixels of feathering to soften the edges of the cut-out so it would blend better. Here’s a picture of my photoshop screen when I was done: 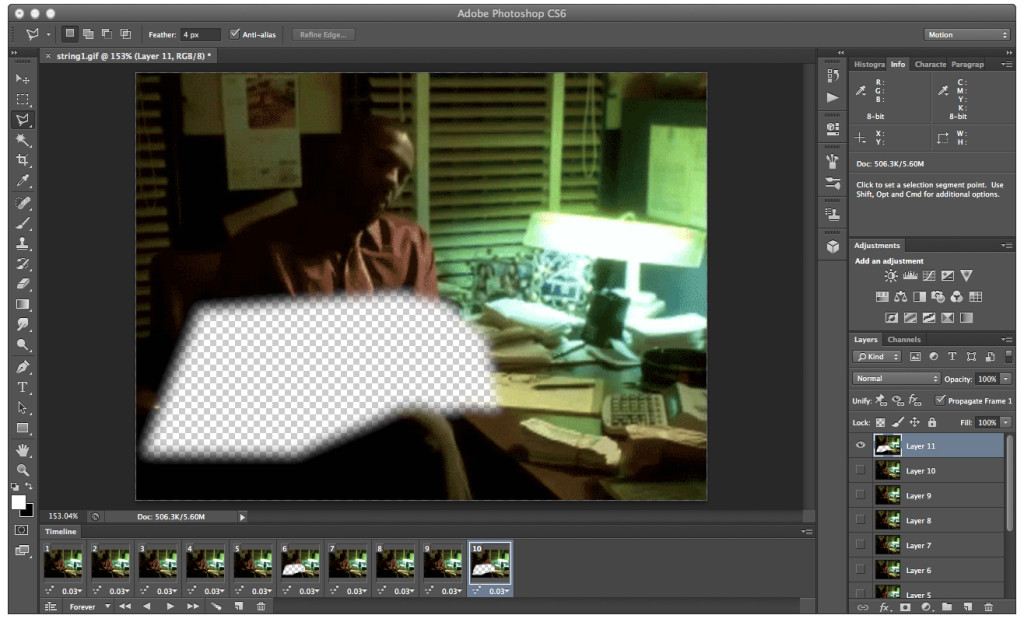 And that’s how I got this picture of String doing his thing.